It was in the first week of April 2010 and CC82 members were waiting patiently for their D-Day – their rare  opportunity to meet their  Cotton College days’ friends after 26 years . The venue of the event  , preparation of  food, cakes, decoration everything were ready. The countdown for the mega show has been started and everyone has started counting  their fingers.   The local Reception Committee members in Guwahati has been putting  their best effort to make it a grand success and preparing meticulously that there should not be iota of lapse.

Suddenly , Kalyan Talukdar, who has been in the forefront in the execution plan,  found the welcome banner of the event was yet to prepare . He immediately got   panicked for this major lapse and oculd not understand what to do. So he immediately rang Ajanta and shouted “ Hey ! Where is our Banner ? I couldn’t yet locate it “  Sensing some major lapse,  Ajanta too panicked but answered bravely “ Nowadays  it is not so  difficult to prepare banner  overnight in Guwahati , once the design of the banner is ready. But  where is the CC82 logo for it ? “

The panic rippled  through their nerve  but after taking a couple of deep breaths, they could able to hold the situation and could understand  that  without receiving  supports from  professional at that juncture, it would be a daunting task for them to prepare the logo and banner overnight.  They must take help from some good helping hand  who could able to design their logo and  the banner immediately.  Though their  brain  stopped working momentarily but   Kalyan  could somehow  able to recollect  one of his very good artist  i.e. Ranjit Brahma ,who could probably able to rescue them from that crisis. Sri Ranjit Brahma was a complete humane beings, easily  approachable   and to the best, he was also from the same institute i.e. Cotton College. Though he was a little senior to us in College  , but now working as colleague in   the same organization with Kalyan. In addition, he is  a professional artist too.

Kalyan suggested Ajanta that  it would be good if they would make a joint  effort to avail the services of Ranjit Brahma. But then he requested Ajanta to accompany him while proceeding to Ranjit Brahma for the request. He might feel that  if Ranjit Brahma declined  it citing his paucity of time, it would be a blunder to the entire CC82 . So for him, accompanying Ajanta would be a safe option.  Ajanta agreed immediately and both went to meet  Ranjit Brahma in the next morning and described him  all about the alumni meet  and requested him to design a logo. Interestingly to their best surprise, he too agreed immediately .

Ranjit da worked overnight and completed the logo before dawn. In the next early morning, he invited Kalyan to see the logo if it is agreeable to him or not.  Kalyan became too excited and went in the early morning. He was overwhelmed to see a logo prepared overnight for CC82 . He Immediately took  a few snapshots of it, uploaded in the Orkut which was the most prevalent social network sites  at that time and to their ning social network i.e. http://cottoncollege1982.ning.com   which was the  dedicated community website of cc82. Immediately there was rousing welcome to the logo from members. From then onward, the logo has become part of  CC82 community .  When  some  remuneration was offered from our side to   an artist, he refused to take even a single penny.  The most important thing is that he was paralyzed to both legs otherwise could have been invited to the get together itself to introduce to our friends. We planned for felicitation later  but he didn’t  give us much time and left for heaven. With heavy hearts , we pay our homage to this senior friend.

Ranjit Brahma , the designer is no more now as  he left for heavenly abode  only after a few days of  illness; but this logo will always keep him alive in the heart and  souls of Cottonians of 1982 batch and specially  in the hearts of them who met for first time at ASHIRBAD BIBAH BHAWAN for the first time on 11th April2010 – the D-Day of CC82. 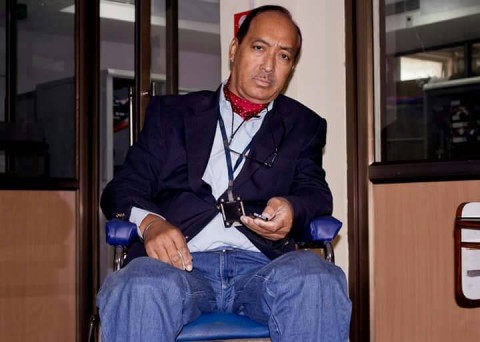 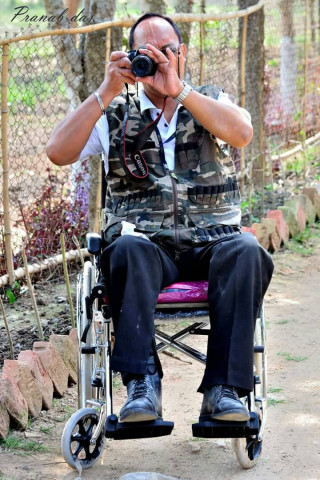